The Finance Ministry of India has decided to allow taxpayers to file their GSTR-3B returns in a staggered manner. The government of India has taken this initiative to avoid the difficulties faced by trade and industry while GST return filing.

As of now, the last date for filing GSTR-3B was the 20th of every month. As per the changes the GSTR 3B date extended, there will three dates - 20th, 22nd, and 24th every month for various categories of taxpayers. Here in this article let us understand the reason for GSTR 3B due date extension.

GSTR-3B is a monthly self-declaration that has to be filed by a registered dealer on the 20th of every month. Tax liability must be paid before the last date of GSTR 3B filing. This tax cannot be revised once filed.

Updates on GSTR 3B Filing due date Staggered

Previously, glitches in the GST Network while return filing was reported on the 20th of January from the Trade and industry. This created difficulty for them while filing GST returns.

It was noted that one-fifth of GST returns were filed on the last date. It was pretty sure that the taxpayers are facing issues while filing GST returns, due to which it was decided that the GSTR 3B due dates need to be extended.

They explained in detail with their following statement "From now on, the last date for filing of GSTR-3B for the taxpayers having annual turnover of Rs 5 crore and above in the previous financial year would be the 20th of the month. Thus, around 8 lakh regular taxpayers would have the last date of GSTR-3B filing as 20th of every month without late fees."

Along with this, they stated that the taxpayers having annual turnover below Rs 5 crore in the previous financial year will be divided further into two categories as follows: 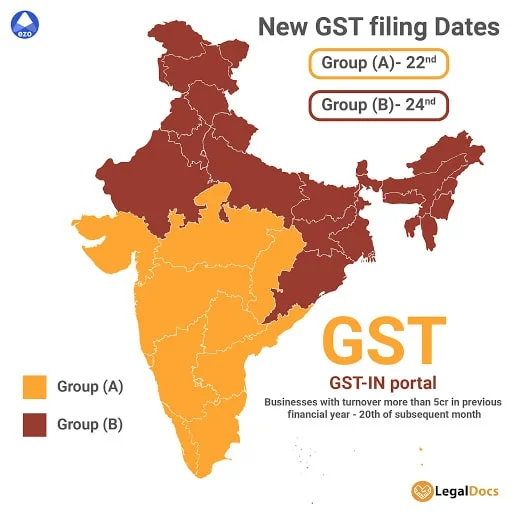 The Finance Ministry has also taken a step ahead to look after the issues faced by the taxpayers while GST Filing. They say  "The matter has been discussed by the GSTN with Infosys, the Managed Service Provider, which has come out with above solution to de-stress the process as a temporary but immediate measure." Along with that In a bid to further improve the performance of the GSTN filing portal on a permanent basis, several technological measures are being worked out with Infosys and will be in place by April 2020.

How to Increase Sales in Business - LegalDocs