Introduction of the E-Way Bill System

With the introduction of the Goods and Service Tax, the business sector has undergone a major change. GST which has subsumed several indirect taxes has brought a tremendous change is the way taxes were being collected. Along with this, the logistics too had a complex process earlier which has now been simplified with the introduction of E-way Bill system.

The business policies and regulations are being mitigated by the government in order to encourage and foster internal trade and business relations in the country. These provisions are being made by the government in order to help increase the GDP of the country which will help us bolster our stand in the global economic landscape. In such a situation, the businesses are finding new opportunities for expansion.

Now, with the introduction of E Way Bill, the legal formalities for transportation of goods has been streamlined.

What is the E Way Bill System?

The e-Way bill can be generated on ewaybillgst.gov.in or even through SMS. After generating an e-Way bill, the unique E-Way Bill Number (EBN) is allocated to the supplier, recipient and the transporter.

Now let us try to understand the concept of E-way Bill.

What is E-way bill?

The E-way bill is a new form of document introduced by the government to curb tax evasion under the Value Added Tax laws. The E-way bill unifies all standard documentation procedures defined under the Goods and Service Tax (GST) regime. Every registered person who is involved in the movement of goods are required to generate the e-way bill irrespective of whether it is an interstate or an intrastate deal. The e-way bill is required to be generated if there is a movement of goods in a vehicle/conveyance of value more than Rs. 50,000 (either each invoice or the sum of all invoices of all those goods in the vehicle or conveyance).

Who should Generate an E-way Bill?

As per the rules prescribed by the Goods and Service Tax Act, there are three parties who are required to generate e-way bill. They are as follows:

How to Generate an E-Way Bill

A supplier/recipient can GST E Way Bill on the e-way bill portal. Now let us try to understand the intricacies with regards to generating an e-way bill:

Following is the screenshot of an E-way Bill: 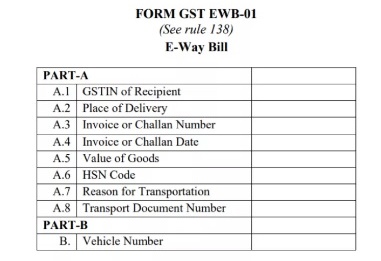 Now let us understand which documents are required for generating an E-way Bill.

The business sector in India is undergoing a transition in major areas with the plethora of provisions that is being provided by the Indian government for easy business operations. The introduction of the GST and the E-way bill system has helped in streamlining businesses to a great extent. Now the system of E-way bill is changing the way logistics had been functioning. And with simplified procedures, the interstate as well as intrastate trade relations will improve which will help create new business opportunities. What is Financial Accounting - Introduction, Concepts and Procedure

How to Get Food License in Mumbai - Maharashtra